Today is (obviously) Halloween, but we got the party started yesterday. In the afternoon, we took the kids to the annual Halloween Carnival at the neighborhood park, and Georgia was able to put on her full costume for the first time. Georgia has wanted to be a cat for Halloween this year since about five minutes after Halloween last year, and Allison has been working on making it for weeks.  I think it turned out great, personally. 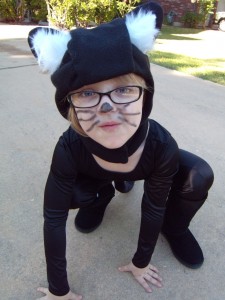 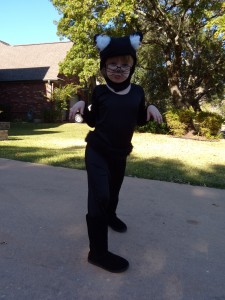 After the kids were off to bed, the grownups put on our costumes, and got ready for the costume party we were hosting. Sonrisa Trippe had spent all day working on the Tardis door, to go along with her Amy Pond costume, and I think it turned out amazingly well. Dean Trippe was Batman (naturally), and as for me and Allison…? 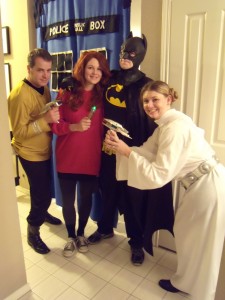 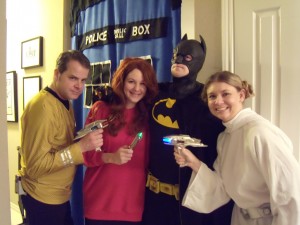 As for me, I kept telling everyone I wasn’t dressed as Captain Kirk, I was dress as Captain Roberson, dammit. 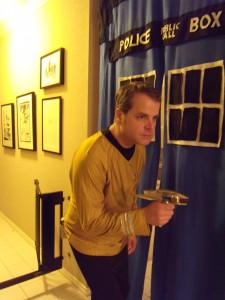 But I wasn’t the only member of Starfleet in attendance. Robert Wilson IV and his wife Tiffany drove down from Dallas to join in the fun, though they’d opted for a more Old Skool look than my New Movie version. Still, we’re all one big happy Starfleet, as Khan said. 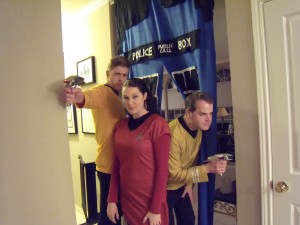 All in all, we had a fantastic time. Thanks to everyone who came! And today we’re finishing the decorating of the Halloween cookies, mutilating a pumpkin–erm, making a jack-o-lantern, that is–and going door to door begging for candy. What could be better than that? 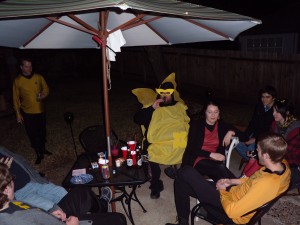